What is the lunar illusion?

You don’t have to buy the best telescope to realize that when the moon is close to the horizon, it appears much larger than normal. It is what is known as a lunar illusion , a fact that we are going to explain to you.

Why does the moon appear larger on the horizon?

Furthermore, it also seems that its color is different. This particular fact is due to the refraction of light from the Earth’s atmosphere, a phenomenon known as Rayleigh scattering .

Because light from the moon has to travel a greater distance through the atmosphere when it is near the horizon, both the moon and the sun appear redder as they approach the horizon.

But, what phenomenon explains the apparent change of the moon?

Explanation of the lunar illusion

There are many theories about the lunar illusion , the fact that the moon appears larger when its position approaches the horizon. There is still no official theory, as it is believed that it could be an optical effect, in which our brain plays ‘a trick’ on us.

However, here are the most widespread theories about why this phenomenon occurs .

The Ebbinghaus illusion is an optical illusion that could explain the phenomenon of the lunar illusion.

According to this theory, a central circle appears larger if it is surrounded by other smaller circles and vice versa.

Although it has been proven, this theory could only increase the size in question by up to 10%, so it would not explain the large difference in size that we see on the moon when it is close to the horizon.

When the moon is above the night sky it is lonely, along with other tremendously distant stars. However, when it is close to the horizon we will always see it accompanied by some more or less terrestrial landscape, which is why it may seem larger to us.

According to this theory, this occurs because our brain is unable to calculate the size of distant objects in relation to others. It would be a matter of perspective, which makes distant objects appear larger than nearby ones.

Our brain believes that the things that are above our head are closer than those that are on the horizon.

That is why when any object approaches the horizon line it thinks that it is further away. The fact is that the moon, unlike terrestrial objects, does not change in size, it is close to, or not the horizon, so the brain could feel confused, miscalculate its size and make it look larger than it really is. it looks.

Since none of these theories finish convincing the experts, it could be that the lunar illusion is motivated by a set of them.

What is clear is that the moon appears larger on the horizon is a simple optical illusion. There are many ways to verify that your size is really the same. For example, you can try to cover the moon from your position with a 5 cent coin, both when it is on the horizon, and higher up. If you wink one eye at a time, you can see that it covers the same in both cases.

If you would like to contemplate the night sky in all its splendor, we invite you to visit our planetarium in Granada . We bring you closer to stellar space so you can enjoy it without limits. 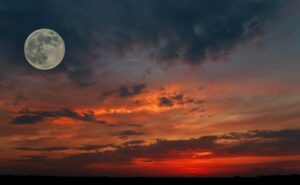 Astronomical Concepts
What is the lunar illusion? Read more "
December 17, 2021